(ii) There is an infinite number of lines which pass through two distinct points.
Answer:
False. Because there is a unique line that passes through two points.

(iv) If two circles’ are equal, then their radii are equal.
Answer:
True. Because the circumference of equal circles is equal their distance is the same from centre. Hence radii of two circles are equal.

Question 2.
Give a definition for each of the following terms. Are there other terms that need to be defined first? What are they, and how might you define them?
(i) parallel lines
(ii) perpendicular lines
(iii) line segment
(iv) the radius of a circle
(v) square.
Answer:
(i) Parallel Lines :

If endpoints of two straight lines do not meet even if they are produced on both sides, they are called parallel lines.
Before the definition concept of point, a straight line is necessary.
Point: A point is that which has no part.
Straight-line: A straight line is a line which lies evenly with the points on itself.

iv) The radius of a Circle : 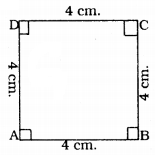 A Square is a figure in which all sides and angles are equal.
AB = BC = CD = DA = 4 cms.
∠A = ∠B = ∠C = ∠D = 90°.
Necessary terms – Quadrilateral, angle.
Quadrilateral In a plane, if 3 points in 4 points are non-collinear and meet in different points, such a figure is called a quadrilateral.
Angle: ‘O’ is common point between \(\overrightarrow{\mathrm{OA}}\) and \(\overrightarrow{\mathrm{OB}}\) Such figure is called an angle.

Question 3.
Consider two ‘postulates’ given below :
(i) Given any two distinct points A and B, there exists a third point C which is in between A and B.
(ii) There exist at least three points that are not on the same line.
Do these postulates contain any undefined terms? Are these postulates consistent? Do they follow from Euclid’s postulates? Explain.
Answer:
There are many undefined terms for students.
They are consistent because they deal with two different situations.
(i) When two points A and B are given, C is in between two.
(ii) When two points A and B are given take point C which passes through A and B.
These postulates do not follow from Euclid’s postulates. But they follow Axiom 2.1

Question 5.
In Question 4, point C is called a mid¬point of line segment AB. Prove that every line segment has one and only one mid-point.
Answer: