Students can Download Maths Chapter 11 Congruency of Triangles Ex 11.6 Questions and Answers, Notes Pdf, KSEEB Solutions for Class 8 Maths helps you to revise the complete Karnataka State Board Syllabus and score more marks in your examinations.

Question 1.
Suppose ABCD is a rectangle. Using RHS theorem prove that the triangles ABC and ADC are congruent.
Answer:

Question 2.
Suppose ABC is a triangle and D is the midpoint of BC. Assume that the perpendiculars from D to AB and AC are of equal length. Prove that ABC is isosceles.
Answer: 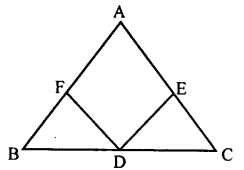 Question 3.
Suppose ABC is a triangle in which BE and CF are respectively the perpendiculars to the sides AC and AB.
If BE = CF. Prove that triangle ABC is isosceles.