Question 1.
The Supreme Court of India came into existence in
Answer:
January 28, 1950.

Question 2.
The retirement age of the High Court judge is
Answer:
62 years

Question 3.
The Judges are appointed by
Answer:
President.

Question 4.
The head of the Revenue Tax Board is
Answer:
Revenue Secretary.

Question 5.
The Lokadalats came into existence in the year
Answer:
1985.
Answer:
Functions of the Supreme Court :

Question 1.
Explain the functions of the Supreme Court. 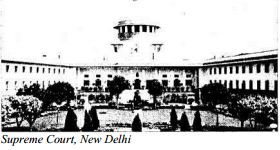 Answer:
Resolving the disputes between the Union and State Governments; between the States; safeguarding the Fundamental Rights of citizens; interpreting the provisions granted by the Constitution are the original powers of the Supreme Court.

It also exercises appellate powers and advisory powers. It has the power to accept the appeals made against the judgment given by the lower courts. This is called appellate power. It can advise the President regarding public issues when its opinion is sought. This is called advisory power. It also serves as a court of records, chief advisor to the center, and state governments and also issues special writs. Question 5.
Write a note on Revenue Courts.
Answer:
There are Revenue courts in every district. They take up cases related to land tax, land records, etc. Revenue Courts comprise the following courts:

Question 6.
What are the reasons behind the establishment of Lok Adalat Court?
Answer:
In India, the legal procedure is time-consuming and expensive. As an alternative, the Government has set up other forms of legal institutions that function faster and are less expensive. These institutions came into existence in 1985. One of them is Lok Adalat. It takes up cases from parties who mutually agree to settle the cases amicably. Cases that have not yet been disposed of by the other courts or the High Court can be settled by the Lok Adalats. The judgments given by the Lok Adalats are final and binding on both the parties and appeals cannot be filed against them.